The difference between a Muslim and a Mu’min and why 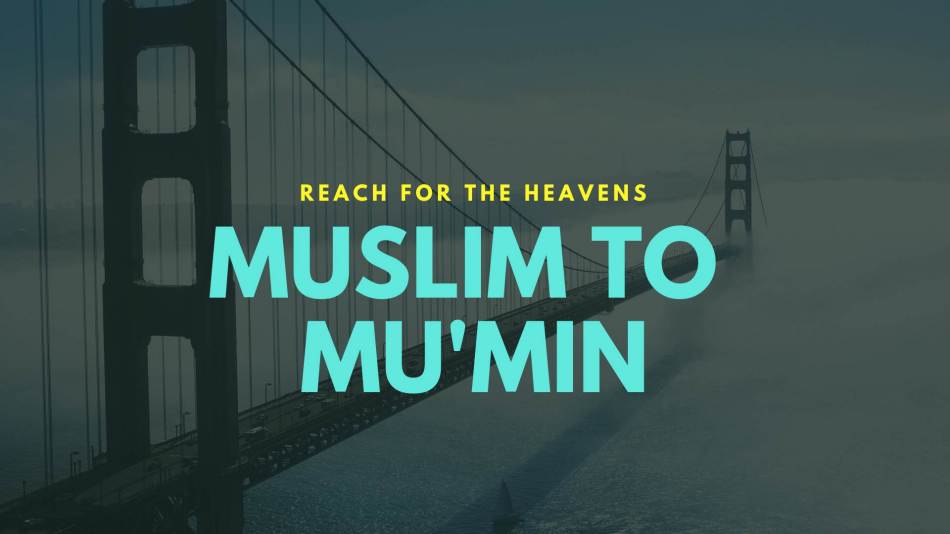 Muslim and Mumin / Momin  are two terms that describe the believers at different stages in their Islam. We all have it in us to improve and become greater than we are currently. Allah has set for the believer levels to climb to greatness and success.

So, why do we differentiate then, what’s the difference between a Muslim and a Mumin?  Islam offers the believer a Goal for personal growth and development. Allah The Most High, gives the believers a clear path for growth and development in life. Islam, Iman, and Ihsan are the three levels of growth for every Muslim. At level one we are all Muslim, the State of Submission to Allah and His messenger, fulfilling our basics of prayers, fasting, charity, and the Hajj pilgrimage. The second stage is the level that the Muslim is described as Mu’min, one who’s belief (Iman) has penetrated the heart at a deeper spiritual level. The Mu’min is described as the one who believes in Allah, the Angels, the books of revelation, the Messengers, the Day of Judgement and divine decree. All of this coming from the pillars of faith in Islam.

A Mu’min is one who is always much more aware of Allah and strives to develop both the inner Iman and the outer actions. The Last stage is when the believer is described as Muhsin having reached the level of Ihsan. Ihsan is a level of excellence and mastery, where the believer is practicing faith in Allah, as though he sees Allah, even though that is impossible. At this point you find that the level of God-consciousness helps them to guide their actions and decisions in daily life, always striving to perfect themselves and please Allah.

It’s important to understand that Islam for every individual is a process of growth and development, and then finally actualisation of the best versions of ourselves. The above description of the Muslim and the Mu’min is established in the Hadeeth of Jibreel (Peace Be upon him). We are taught in this Hadeeth that these are the 3 stages of growth in Islam. However, there is much more detail to how you actualise this path of growth in your life. It’s much more simple and practical, and insha’Allah in this article will discuss a few ways that you can actualise this in your daily life.

What is Islam and Imaan, Muslim and Mu’min

Before we get started on how, let’s first address the issue of ‘a state Islam and Imaan’ as it is described in the Quran because it’s important to know the difference. In some places of the Quran, you find that the 2 words Islam and Iman come together and other times Allah refers to the believers as either a Muslim or a Mu’min

When the two words, Muslim and Mu’min come together in an ayah of the Quran, the word Muslim relates to the outer actions and deeds such as taking the testimony of faith (Shahadah), praying the five daily prayers, giving the Zakat (Charity) and the other actions of a Muslim.  As for the word Mu’min, in this case, it relates the inner actions of the heart, such as unwavering belief in Allah, the Angels, Messengers and the unseen such as day of Judgement, Paradise and hell. These two states, the outer Islam and the inner Islam of the heart, come together to describe the complete Mu’min.

A Muslim could be in a state of Islam (a Muslim) but not yet in a state of Imaan (a Mu’min) because the outer actions are that of a Muslim, the prayers, fasting etc. However, maybe what’s hidden in the heart is actually disbelief or doubt. This is a dangerous situation because it’s one that the hypocrite finds himself in. However, that doesn’t make you a hypocrite if you are sincere and at the beginning of your journey of growth.

The remedy to this is to acquire knowledge because that knowledge will erase the doubts and bring you certainty. This is why Allah says:

The Bedouins say, “we have believed”, Say (Oh Muhammad), “you have not yet believed, say instead we have submitted”, for faith has not yet entered your hearts.

You see in this verse Allah, Islam and Imaan come together and in this case, the verse means that yes you have submitted, become a Muslim, however, Imaan is yet to enter your hearts and take you to the next level of being a Mu’min. That requires seeking knowledge and practising it day to day. At that point, you will become a Mu’min.

When the two words are mentioned in the Quran by themselves, the word contains both meanings of the inner and outer states of Islam. So when Allah refers to a Muslim, or to a Mu’min they would mean the same thing.

And give good news to those who believe and do good deeds that for them there is Paradise beneath which rivers flow.

The famous Hadeeth of Jibreel outlines the 3 stages of development.

“whilst we were sat with the messenger of Allah (peace and blessings be upon him), a man approached was wearing a pristine white garment and his beard was a piercing black, with no signs of travel upon him. None of us knew him and he sat with the Prophet(peace and blessings be upon him) very close and put his hands on his lap and then said “inform me about Islam”, The Messenger of Allah said, “it is to testify that there is No God worthy of worship except Allah and that Muhammad is his Messenger, to establish the Prayers, give charity, fast in Ramadan and perform Hajj if one is able”. The man said, “you have spoken the truth”. We were shocked that he would ask the question and then confirm it as true. The man then said “informed me about Imaan”, so Messenger(Peace Be upon him) said, “it is to believe in Allah and his Angels, His books, His messengers, the Day of Judgment, and to believe in the divine decree, the good of it and the bad of it”. The man replied “you spoken the truth” and then said “informed me about Ihsan”, So, the Messenger said, “it is to worship Allah as though use him, even though you can’t see him, and you know He sees you.”.

This Hadeeth continues a little. But this will suffice us to understand the difference between what a Muslim is and what Mu’min is. It is important for us to understand that any person who acknowledges and accepts Islam is submitting to Allah and that makes them a Muslim.

This is the foundation of Islam and anyone who enters upon the faith of Islam becomes a Muslim, but it is the beginning of the road. For every one of us, there is a journey to be made in life, from Islam to Imaan and then to Ihsan. This is real life, and we begin by doing and taking steps towards growth and development and Islam shows us a clear path.

This is a rhetorical question, and Allah is stating a fact that people of knowledge are not equal to those who have no knowledge. So if a person goes from disbelief and doubt to belief and certainty, then they’ve developed and grown into Islam. This Hadeeth of Jibreel shows us a clear path that we need to take once we have submitted to Islam. Whether you were born a Muslim or you became a Muslim, you have to take a journey of development and that starts with knowledge and understanding.

From Muslim to Mu’min

The Prophet (peace and blessings be upon him) informed the believers around him that the man in the white garment was, in fact, the angel Jibreel (Gabriel), who had come to them in order to teach them their religion (Deen).

The word Deen means a system of life and that’s what Islam is. In Islam, we have systems that help us to go from one place to the next providing a clear route.

Allah, the Most Compassionate, The Most Merciful would never leave us on the earth with no guidance, not showing us how to achieve success in this life on the earth as well as attaining the greatest success of Paradise in the hereafter. So, Allah has shown us through the Sunnah of the Messenger (peace and blessings be upon him) that we need to go from submission to actual belief.

Actual belief is when the beliefs that we hold have penetrated our hearts and moves us to action.

Knowledge is the prerequisite that takes you through the stage of Islam. You cannot become a Muslim unless you have an understanding about what you are about to enter (Islam). When you submit to Allah and His Messenger, then you go on a quest for knowledge in order to understand how to actualise your faith. This actualising of knowledge is living with knowledge.

And give good news to those who believe and do good deeds that for them there is Paradise beneath which rivers flow.

But before you can practice what you know, you have to seek to understand. That doesn’t mean that you keep seeking to understand and you never start practicing. Instead, these 2 things happen at the same time you learn and you do.

The Mu’min actualises that knowledge by living it day to day and trying their best. It’s never about being perfect and not making mistakes. Allah knows us better than anyone and hence, He is the Most Compassionate.

Ihsan is the highest level of the believer

In this Hadeeth, the Prophet (peace and blessings be upon him) said that Ihsan is a state in which the believer behaves as though he sees Allah, even though he can’t. This means is that we should behave as though we are constantly in a state of awareness. Aware that Allah is watching us and sees everything that we do and say. Ihsan is a level that transcends the normal level of a Mu’min because the person is constantly in a state of remembering Allah.

Constant doesn’t mean 24 hours a day, but it does mean that when they make decisions and take actions, they are influenced and guided by their love for Allah and obedience to him, or their fear of the anger of Allah. The person who is in a state of Ihsan is always striving to become the best version of himself. A Muhsin is someone who focuses on mastery of the self. This is the level of the Masters.

When you are able to master your daily rituals of prayer, thought and focus, you become very powerful as a person. Your confidence is very high and your belief in your own abilities grow to an unprecedented level where you master anything you put your mind to. Your connection and belief in Allah strengthen you and your reliance on Him.

Anyone can go from being a Muslim to a Mu’min by simply acting upon the knowledge that they have. And anyone can go from being Mu’min to a Muhsin by practising and continually striving to the master of themselves. Personal growth and development is the key to attaining paradise as the Messenger of Allah (peace and blessings be upon him) said:

Indeed, I have been sent in order to perfect the character. 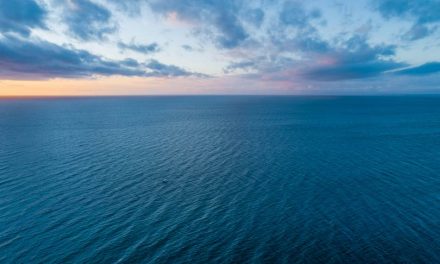 How to get anything you want from Allah 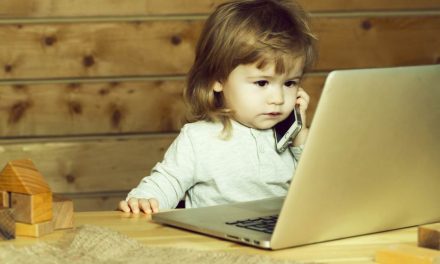 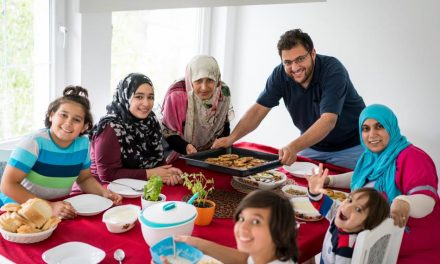 Prepare for Ramadan – How to Have the best year ever 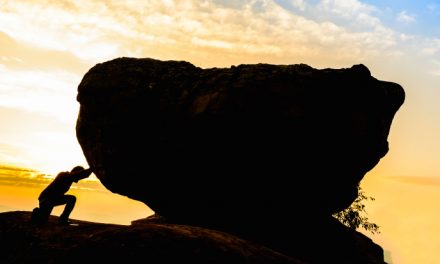